My grandmother Xenia Vladimirovna was born in Russia 1908. Her father was in the Tsarist Russian navy. After the Bolshevik revolution 1917 he did not return from sea. After a brief marriage to a widowed vet surgeon with five sons, Xenia told me, her mother Eugenia and three sisters Helena, Galya, and Marya made the journey by Trans-Siberian railway to Harbin, Manchuria in 1923 to find husbands in China. As a singer and dancer at the Modern Hotel, Harbin across the ballroom she met my grandfather Serge Ermolaeff (Serge Ermoll and His Music Masters). “I didn’t think Serge would notice but he did, we Russian girls wore beautiful gowns because at least we got paid, not like my Chinese friend Rose, who had to make money in other ways….” she told me half her life lease later in Sydney. Later in Shanghai she married Serge 1933 where they re-met at the majestic Hotel. My father Serge Jr was born 1943 in Shanghai during the Japanese occupation in China. After a successful career as a jazz orchestra leader in the big clubs and hotels of Shanghai: Paramount, Cathay Hotel, Ladlow’s Cassinova, the French Club, Wagon Lits my grandfather Sergei accepted passage on the Chan Cha ship to Hong Kong and then Sydney Australia 1951. Decadent jazz music became unfashionable with the Chinese Communist revolution, but he managed to continue working at the Russian Club, in Pitt Street Sydney. He brought with him my father Serge, his wife Xenia, his musical scores, and one Trumpet. The Australian government gave them a peppercorn lease on a Deco house on Monterey Street in Sans Souci. My grandmother always told my father a young jazz pianist also……”don’t dream about Melbourne “its such an old fashioned town!”…her sister Galya married a British businessman from the Shanghai Texaco Company and relocated there….Xenia and Sergei made the train trip on the Sydney-Melbourne over night express many times.

Xenia a Russian Lady from Shanghai 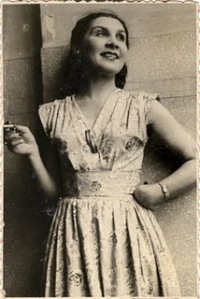 This is a portrait of my grandmother Xenia Vladimirovna Ermolaeff

Eugenia and Vladimir an Admiral in Russian Tsarist Navy, c. 1920