CRUEL BEAUTY
The articulation of ‘self’, ‘identity’ and the creation of an innovative feminine vocabulary in the self-portrait paintings of Frida Kahlo.
A dissertation submitted in fulfillment of the requirements of the Master of Letters (Art History & Theory/ Gender Studies), University of Sydney, 1998 (with Merit), book published VDM Verlag Germany, 2009. [download book Sydney eScholarship Repository] 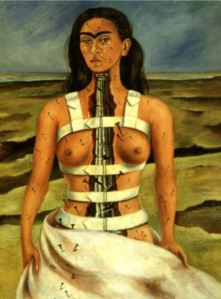 Abstract: The Self-Portraits of FRIDA KAHLO

This book examines the self-portraits of Frida Kahlo and explores the way in which they articulate a ‘self’ and ‘identity’ through creating an innovative feminine vocabulary. The aim of this creative research is to explore the way in which Frida Kahlo represented her sexual subjectivity in the body of self-portraits she produced in her short life time. The self-portraits, some of which were produced in a state of severe physical disability and chronic illness, were also created in the shadow of her famous partner- socialist Mexican muralist/ revolutionary Diego Rivera. An examination of the significant body of self-portrait paintings produced by Frida Kahlo, informed by her personal letters, poems, and photographs, broadens the conventional definitions of subjective self beyond the generic patterns of autobiographical narrative, characteristic of an inherently masculine Western ‘self’. In Kahlo’s self-portraits the representation of the urban Mexican proletarian woman-child draws stylistically from the domain of European self-portraiture, early studio photographic portraiture, and the biographical Mexican Catholic retablo art, with its indebtedness to the ancient Aztec Indian
symbology of self.
The Impulse to Represent the Self: Narcissus
The first image was a portrait. In classical mythology, a lovely youth named Narcissus lay beside a pool gazing in adoration of his own reflection…In the Bible St Veronica compassionately pressed a cloth against Christ’s face as he stumbled to Calvary, and found His true image miraculously printed on the material…St Luke became a painter because, having experienced a vision of the Virgin Mary, he was inspired to produce a faithful portrait of her. 2 The self-portraits of Frida Kahlo significantly open up a new horizon in twentieth century painting. The works, created in Mexico in the 1930’s and 1940’s intersect with and extend the tradition of self-portraiture in the West. Contemporary modernist Mexican concerns to conserve, celebrate, and resurrect indigenous Mexican Indian culture were likened to the classical re-discovery of Greco-Roman antiquity in Renaissance Art. The portrait genre existed in Western antiquity and the early Christian world in the form of statues, busts, coins, sarcophagi and wall paintings. 3 The re-discovery of portraiture has been considered a definitive feature of the Renaissance, as exemplified by the artist Albrecht Durer’s project to represent the self. Durer fashions his 1500 Self-Portrait as an emblem of the powers of the individual creator, with the visual allusion to the vera icon of Christ.

“ Durer mythicises the identity between image and maker …endowing his likeness with the “omnivoyance” of a holy icon, he celebrates himself as a universal subject, whose all-seeing gaze is subject to none.” 4

Strikingly, there are parallels with Kahlo’s own impulse to represent the self in a period of Mexican history that has been termed the Mexican “Renaissance”. The legacy of Durer in Kahlo’s art is manifest in the close analogy between (i) bodies and texts, (ii) the artist’s self-portrait and the holy image (in the case of Durer, the body of Christ); and (iii) the Renaissance painter’s ascent from craftsman to artist, celebrating the artist’s art as the vera icon of personal skill. The Renaissance humanist notion of Man as created in the image of God is envisioned in Durer’s idealised 1500 Self-Portrait, where he is both created in the image of God and through artistic production creates as God. Kahlo’s repeated imaging of her incomplete barren body, a suffering and wounded body, places the woman-child at the centre of the universe, as universal all-seeing subject, yet corrupted and incomplete, as in Durer’s later self-portraits. Kahlo’s self-portrait works such as The Broken Column (1944); The Wounded Deer (1946); and The Two Frida’s (1939), recall the representation of the body in pain in Durer’s Self-Portrait as Man of Sorrows and Self-Portrait of the Sick Durer (a. 1512). In these works there is no illusory sense of self mastery in depictions of the wounded and incomplete body.

A shadow flickers across the history of the self-portrait, from Durer’s art in the Renaissance to twentieth century modernism – the original founding myth, the desire for self knowledge and the Fall. Transcending the Biblical manifestation of this myth and at the heart of the desire to regain the paradise lost of immortality is ever-present tyranny of the flesh – Death. Durer analogises his body and self in his self-portraits to the divine emblem of Christ, whose ability to transfigure Death in the Resurrection image and his eternal life, is reiterated in Kahlo’s self- portrait’s which iconocise her suffering body, expressing the interior landscape of the artist, and a psychological space of sensation, emotion, and memory.While these qualities are present in traditional masculine self-portraits, in Kahlo’s self-portrait work it is perhaps for the first time that Western painting has represented the specificity of feminine sexual subjectivity.
Photographic Portraiture
Frida Kahlo’s Jewish/German immigrant father Guillermo Kahlo was introduced to photography by his second wife (Frida’s Spanish/ Indian mother) Matilde Calderon de Kahlo, whose own father was a photographer. Matilde encouraged Guillermo to take up her father’s profession. This resulted in Guillermo Kahlo’s first major Commission – by the Secretary of the Treasurer under dictator Porfirio Diaz – to record Mexico’s architectural heritage for the 1910 celebration of the centennial of Mexican Independence. This won Guillermo the accolade of “first official photographer of Mexico’s cultural patrimony”. 5
Modern photographic portraiture had a profound influence on Kahlo’s self-portraits, which she often used as the basis of her paintings. In the work My Grandparents, My Parents, and I (1936) there is visual evidence to suggest that the portraits of her parents are directly based on their wedding photograph. 6

This highlights the legacy of the recent photographic medium upon modern painting, a medium with a tradition spanning centuries. As Roland Barthes writing on photography articulates… ” Painting can feign reality without having seen it. Discourse has signs which have referents… Contrary to these imitations, in Photography I can never deny that a thing has been there. 7

The self-portraits represent Kahlo’s reality, like the folk retablos in which the village artisan pins objects from the accident to the votive offering (a victims hair, samples of a vehicles wreckage), she symbolically rather than physically incorporates traces of imaginary and material objects. In all the roughly fifty five self-portraits produced the lens is turned back upon the viewer who is forced to apprehend the dominating subjective gaze of the model Kahlo, thus the surveyor becomes surveyed.

2. The Bus Accident, “Assassinated by Life”

Central to the Frida Kahlo narrative of self is a tragic bus accident, the injuries incurred of which she never physically or emotionally recovered. Indeed the physical injuries sustained in the accident when she was eighteen

years old prevented her ability to hold a pregnancy, and in later years, of being able to walk. Kahlo remembered the bus accident on the afternoon of 17 September, 1925: The accident took place on a corner in front of the San Juan market exactly in front. The streetcar went slowly, but our bus driver was a very nervous young man. When the trolley car went around the corner the bus was pushed against the wall…It is a lie that one is aware of the crash, a lie that one cries. In me there were no tears. The crash bounced us forward and a handrail pierced me the way a sword pierces a bull… 8 Frida’s lover Alejandro Gomez Arias described her situation:…Something strange had happened. Frida was totally nude. The collision had unfastened her clothes. Someone on the bus, probably a painter had been carrying a packet of powdered gold. This package broke, and the gold fell all over the bleeding body of Frida…and then I noticed with horror that Frida had a piece ofn iron in her body.” …They thought she would die on the operating table… The steel handrail had literally skewered her body at the level of the abdomen; entering her left side…“I lost my virginity”, she said. 9

The images of suffering, wounds, loss, grief, and barrenness appearing in much of her work could be derived from this fateful accident, an event scarring her body for life. The tears that she claims she never shed on that day seem to be endlessly reproduced in her pictures. The pain that she suffered throughout her short lifespan necessitated the long term and perpetual use of pain-killers and morphine. Indeed, all medical evidence pointed towards this substance as the cause of Kahlo’s suicide 13 July 1954. 10